The Moseley Railway Trust exists to preserve, conserve and interpret locomotives, vehicles and other artifacts from industrial narrow gauge railways. Often everything we do is in the past tense – the industrial railway narrow gauge is all but extinct in the UK, other than a few pockets of resistance at peat works and the like.
So, this week, I thought I’d turn attention slightly further afield and look at such a railway still running. The pleasent small Swiss town of Bruggen is located on the main Gotthard pass railway line running from Zurich through the famous tunnel to Italy. The Holcim cement works in Bruggen uses a 750mm gauge railway to convey the raw product for cement making – limestone – from a quarry which is about 2km from the works itself. As you might expect in Switzerland, the railway is a model of modern efficiency. It uses two modern Diema locos, built in Germany, and these shuttle from the automatic loader to the automatic unloader via a railway which runs through pleasant Alpine meadows, past cows with bells (because their horns don’t work), across a main road and underneath the main line railway. The most unusual feature is the use of tiny “driving trailers” – the locos don’t run round at each end, the trains are worked push-pull with the driver in the driving trailer or the locomotive.
There will be a fuller account of this railway in a forthcoming edition of Moseley Matters, which is the quarterly journal produced by the Moseley Railway Trust. Receiving Moseley Matters is just one of the many benefits of membership – a snip at 15 pounds a year. Contact us at here for more information. Big News is coming – keep looking here regularly and be the first (maybe the second at a pinch) to know!! 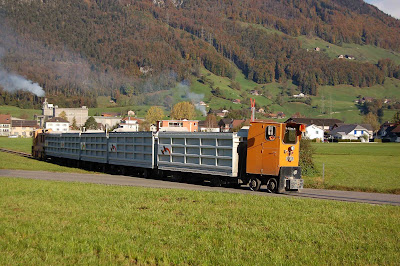