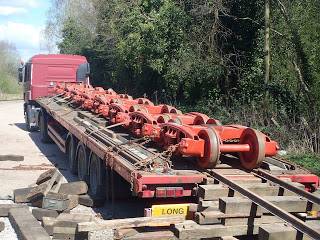 With only three weeks to go before Tracks to the Trenches 2016, activity at Apedale has taken on a frenzied pace. The usual mega-shunts have begun to try to clear running lines of wagons and begin to get vehicles where we need them. This has been made a bit easier this time by the departure of eight of the ex-South Africa bogies, all off to North Wales for use in various projects. Two of the eight are MRT property, and will eventually return to Apedale under the second ex-Ffestiniog Railway coach.
Various projects are rapidly coming to fruition; the replica King George Trench Tramway Inspection Car has been completed (but is a little camera shy). The large Pechot bogie wagon has been absorbing the entire UK stock of MIG welding wire – and there’s still more to be done. Will it be completely finished in time? There’s only one way to find out! As ever, get in touch here. 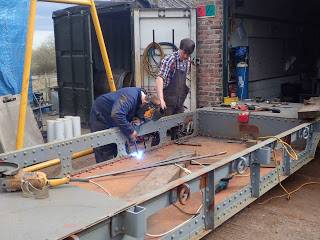