Winter has maintained its unrelenting icy grip down in the Apedale Valley. At times, parts of the site began to resemble a submarine film as burst pipes showed themselves as sprays of water, followed by desperate fumbling for an isolation valve. There was never any risk of the workshop descending below hull crush depth. On days like this, it’s amazing how many indoor jobs suddenly show themselves. One such was moving a loco which is a resident in the Heritage Centre’s museum building. There is a need to carry out some repairs to the floor area where Hunslet 9056/82 stands. This is a fairly chunky loco, tipping the scales at 4 tonnes, and came to us from Calverton colliery. Some temporary track was laid, and the loco pushed to its new resting place. 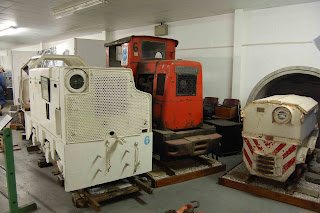 This movement allowed a rare glimpse of the full glory of the backdrops, painted some years ago when the loco was put on display. They are based on photographs taken of Ruston & Hornsby locos at Lea Hall colliery and at Sandhole colliery. As ever, we’d be please to here from you – get in touch here.