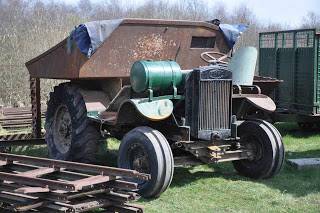 A very pleasant spring day has seen a wide variety of things going on at Apedale. Passenger trains have been ambling up and down the Apedale Valley Light Railway, with both passenger diesels seeing action today for driver training and assessments. Elsewhere, the rarely seen Motor Rail dumper had a trundle around the site to its new parking place. Having reminded oneself of what it’s like to drive, one can only breathe a sigh of relief that not too many were built. The S&T department does not normally feature large in the Apedale organisation, largely due to the almost complete absence of both signals and telecommunications. However, the solitary signal was in need of a top coat of paint which is has duly received. You may also recall that AGM day, less than a month ago, was greeted by deep snow and a general air of Siberia. The day also saw the big Hudswell diesel run prior to restoration commencing. Restoration has now begun in earnest. Investigations revealed that one of the problems with engine starting was due to a meerkat obstructing the exhaust system. This has now been removed, along with the loco radiator. If you want to compare the meerkats –  well tough luck, we only have one, so there’s nothing to compare. But if you want to get in touch, click here. 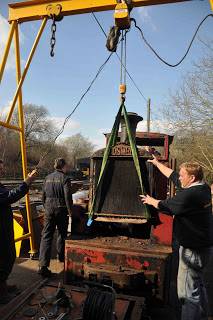